LAUNCH OF THE ATT MONITOR 2022 REPORT

This event was opened by Ms. Carina Solmirano (ATT Monitor), Ambassador Thomas Göbel of Germany and president of CSP8, Ms. Sabine Visser of the Netherlands and Ms. Milagros Winkeldried of Peru. Ambassador Thomas Göbel as well as Ms. Milagros Winkeldried (CONATIAF) of Peru both highlighted the role of the ATT Monitor Report in furthering Treaty implementation by supporting States Parties. Ambassador Göbel also pointed that the 2022 Report provides the necessary insights to evaluate how the Treaty itself is evolving.

Ms. Sabine Visser (Netherlands Ministry of Foreign Affairs) stressed the need to assess treaty reporting not only quantitatively but also qualitatively noting that reporting must include as much information as possible, including reasons for denials. She also acknowledged the complex climate generated by the armed conflict in Ukraine. Ms. Milagros Winkeldried (CONATIAF) of Peru stressed that its reporting obligations under the ATT have been a key priority since joining the Treaty, despite a number of challenges. Peru engages with its reporting obligations not just by filling the reporting templates, but by thoroughly engaging with its obligations following a multi-stakeholder approach which allows the relevant governmental actors to be involved in reporting through repeated meetings with cross-referenced information. This provides detailed information which is key for treaty compliance, a compliance for which the support of civil society is deemed very valuable, along with cooperation between States, supranational institutions and industry.

Ms. Carina Solmirano (ATT Monitor) proceeded to further discuss universalization highlighting how treaty adoption is slowing down progressively. While Treaty membership within the Top 20 exporters is high (notorious exceptions being the US and Russia), membership is very low among the top importers. Political challenges, such as the deprioritization of the ATT and the Geneva and exporter-centered approaches, and procedural issues such as the rotation of civil servants among different branches or the political cycles between administrations are identified as slowing universalization. Matthew Steadman (ATT Monitor) gave more details pertaining to the 2022 Report, highlighting some trends, such as the declining compliance with reporting obligations, the increase in the number of private reports, and the welcome increase in States submitting overdue reports.

Only 57% of the State members submitted their reports, and of those submitted, 30% of those submitted were private, the combination of these two facts significantly decreasing data availability. On a positive note, data aggregation practices are becoming less common, which increases data quality. Besides reporting trends, Country Profiles are discussed as a longitudinal tool that can help to contextualize States reporting compliance over time. ATT Monitor’s Country Profiles include information on areas in which reports constitute good practice, where improvements can be made, and summaries of import and export transfers data.

Ryan Fletcher (Stimson Center) explained that initial reporting is still a complex challenge, with 78% of States having not submitted their initial reports. 24 States have reports pending submission and of those, 16 are overdue for more than years, and many States are reporting on a confidential basis. He emphasized however that late submission of ATT reports is preferable to no reporting.

The new initial report template has already been used by one State Parties (Romania). Initial reports remain overall a valuable tool to assess treaty implementation. While compliance is still low and some reports are submitted on a confidential basis, some overdue reports have been submitted recently along with updated initial reports including from Hungary, Japan, New Zealand, Romania, Slovenia or Switzerland.

Overall, on-time reporting is lowering, with only 40% of States complying with their obligations on time, the worst statistic since 2019. Some of the identified causes include time and resource constraints, competing priorities, and the pandemic strain. These factors however do not fully explain the phenomena, nor the increase in private reporting, which diminishes the usefulness of the reporting mechanism as a whole. Therefore, it remains key to identify and address the obstacles to reporting compliance.

Arms Treaty Monitor Retweeted · UN Institute for Disarmament Research
@UNIDIR
1/3 Last week, UNIDIR and @UN_Disarmament jointly organised a side event to the #FirstCommittee on the continuing importance of transparency in armaments and new developments.
Many thanks to the panellists and those who attended! https://t.co/PT2dsqbXh4
View on Twitter 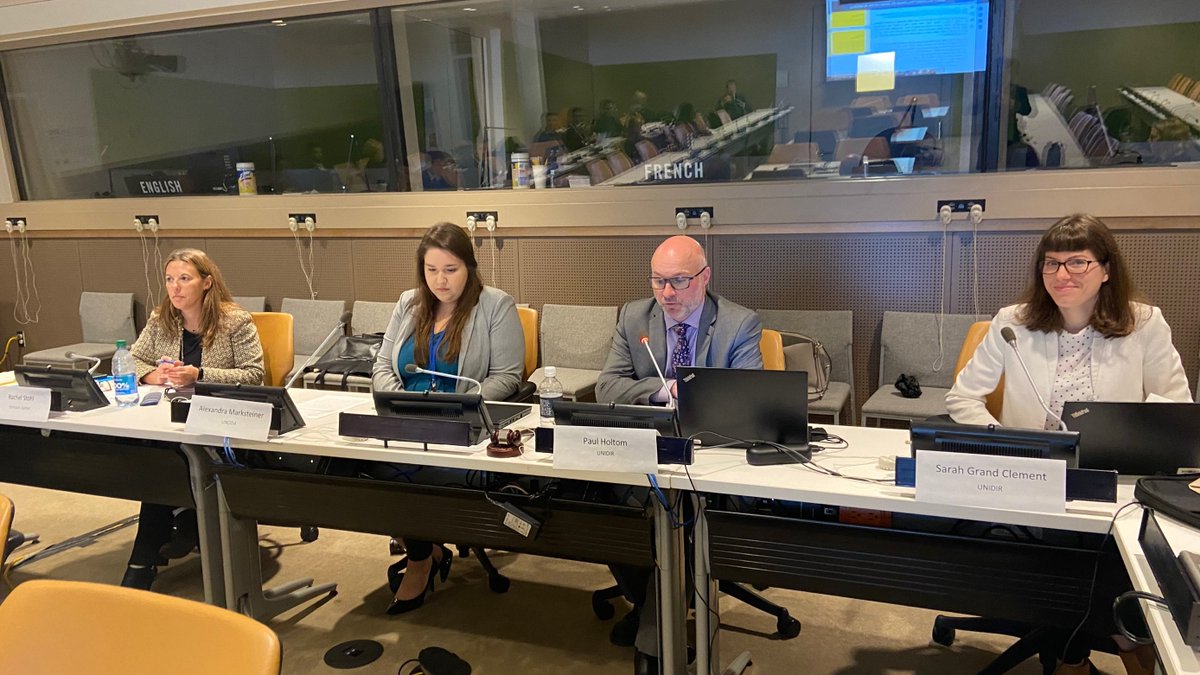